The first round of the MIJ Taff Buggy stuck to usual tradition, the weekend was dry, but absolutely freezing on the Sunday. There had been a few changes to the track from previous year, which had made the track more challenging. 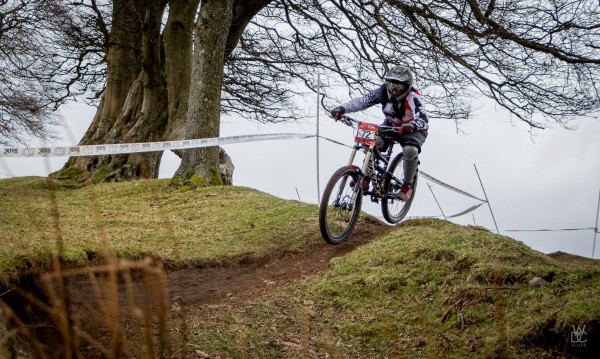 The top section continued along the same start line, a flat pedally section into two small berms, the next section was a choice of a drop off a wall onto a down slope, or a chicken line to the left. This is where a new track feature had come in, a steep step-up which a lot of people struggled with due to the sticky mud, it was hard to clear for some. If you did clear the step-up the landing was an off camber bank which was slick at the best of times, with a choice of a small tight turn into a box drop, or a chicken line off to the right, which meant you had to turn quite sharp to line up with the next berm. The usual jump into the berm came after, with a few small turns and rocky sections before taking you to another larger drop near the bottom. This also had a choice of chicken line, but it was incredibly hard to line up for, there was no good way to line up, due to rocks in the run in. There was a good turnout for the weekend despite the cold. 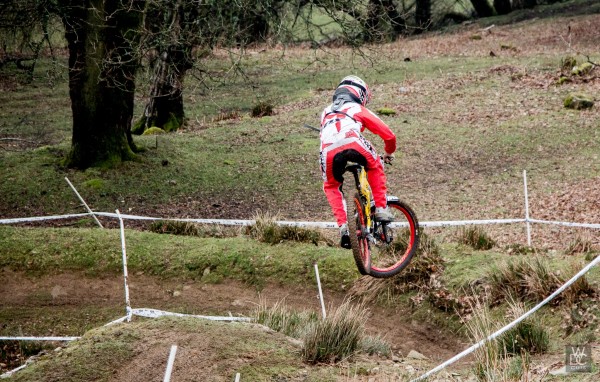 This brought you into a flat section which was on a slight incline, with roots and rocks, it was hard to get over if you lost any speed on the run in. The next section was by far the worst, a steep, rocky, rooty chute, which spat you out into the field below, it claimed more than a fair share of victims this weekend, either on the slope or in the field below. From there you get to a muddy field, into a double, through a gap in the trees into a down slope with a few rocks and some pump-able sections, then into a rock garden, with a small drop out into another field. This is where you can make up time if you lost any at the top, there is plenty of opportunity to pump and pedal in this section, which brings you into a small wooded area, with a few jumps, berms and a rocky section, before promptly finishing in a field at the bottom where the tractors bring you back to the top field. The weekend saw a few crashes, but no one was too badly hurt.

This weekend proved a hard one for me, as I’d crashed on the shoot the year before, buckling my wheel, and badly bruising my chest. 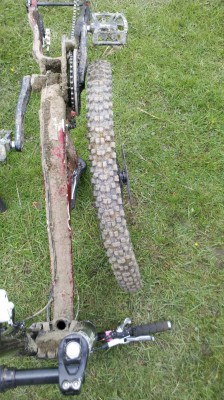 What I did in Saturday practice can’t even be described as riding. I struggled really badly with the thought of the chute that I couldn’t concentrate on any of the other sections. I froze completely, and trying to ride anything at all  meant I was on the brakes and trying my best to overcome the fear of what I knew was coming up next. I knew I had no choice, but try as I might I was a mess. I stood at the top for about two hours, I know some people say don’t because it psyches you out too much, but I wasn’t moving until I’d gone down. I watched people do it, checked out their lines, and nearing the end of practice when the track was quieter, I lined up. I hit my helmet a few times, and got words of encouragement from the marshal at the top, and my boyfriend. I took a deep breath and rolled forward. As I felt myself go over the top I left the brakes go, dabbing the back a few times on the way down. I’d done it. I cried my eyes out because of the massive relief I felt over finally conquering something that had scared me so much. I felt I’d accomplished a lot and left with a more positive attitude for race day.

The MIJ event at Taff Buggy was my first race when I started riding last year, they are well organized, and great fun. There are toilet facilities on site and you can camp overnight if you are staying for the weekend. The uplifts are tractors, and run smoothly throughout the weekend. There is a supermarket in the nearest town of Pontypridd. At the price of £60 for the weekend or £25 for the uplift day they are affordable races, and well worth coming down for. The race starts at the top of the hill, with beautiful views in the Welsh countryside, it’s close to the M4 and Cardiff, and easily accessible from the main road.

The race is part of a series of three held in Taff Buggy Wales, supported by Don Skene Cycles. As a regional A event it’s a chance to enjoy a laid back race series, on a challenging track and gain some BC points. MIJ have another event coming up soon in Aberystwyth , as well as the Forest of Dean Summer series. See the full results on Roots and Rain here.

Photos and crash sequence video from WDC Cuts, and track video from Behind the Tape Productions.