It’s just over a year since we moved into our first home. It’s hard to see the changes when you’re living in a place but looking back, and when you stop and think a lot has changed since we moved in. For the moment I’m just going to focus on the master bedroom because it’s the first room we’ve got finished. I promise I will do a post about the house soon (soon could be any amount of time so no promises on a deadline, sorry! ha). 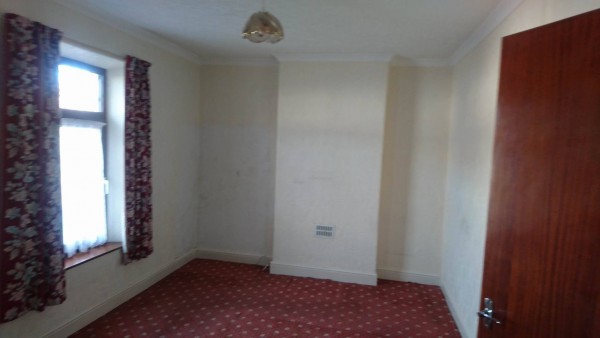 The bedroom when we moved in

The house, situated in Port Talbot is at least 70 years old, quite possibly a lot older. The previous owners had lived here all their adult lives. John, the man who bought the property bought it in his twenties and lived here into his nineties before passing away. He and his wife raised their children here and you can tell it’s a home that was loved and well cared for. We fell in love with it on the first viewing after coming to see it out of curiosity, Port Talbot isn’t somewhere we imagined ourselves being but the house just grabbed us and we could imagine it being home. The photo above is the room the day we moved in. I could see the bones of a beautiful space there, the fireplace, the high ceilings and the size. Plus after snooping under the carpets after a few viewings I could see the lovely floorboards just waiting to be brought back to life. 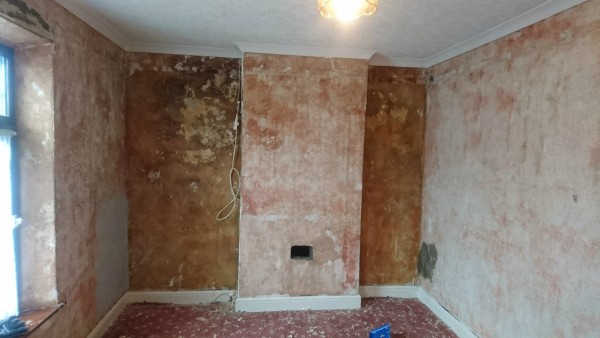 After stripping the paper

As always with home renovations, there’s always more to do than meets the eye. We thought we’d just have to strip the paper, maybe patch up a bit and we could paint. You and I both know things never really go smoothly when it comes to renovating. 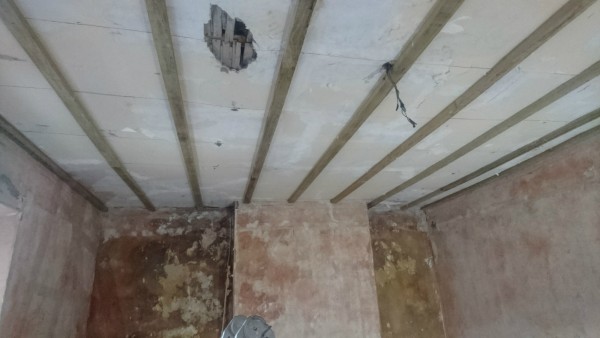 The battens to replace the ceiling.

We were going to take the ceiling down but we replaced it before realising the plaster needed to come off the walls so did it a little backwards. Plus the mess from the ceilings would have been beyond messy (the plaster was bad enough) so we opted to put a new ceiling up and thanks to the high ceilings it didn’t make too much difference and saved some time. For a few battens and plasterboard, it was an easy enough job with a few hands to help. 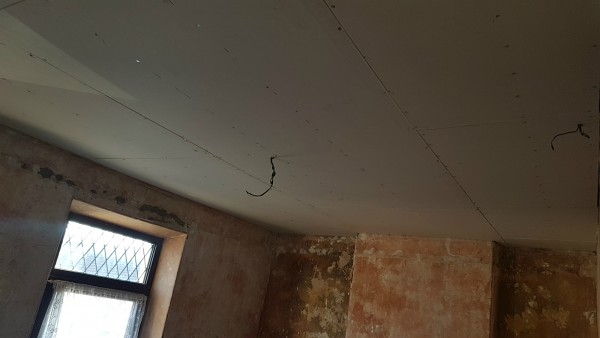 So after the new ceiling, it was time to remove the plaster. What a job! I’ve never seen so much dust in all my life and my house is still dusty now. There’s still some dusty jobs too so I can imagine I will be continuing my relationship with it for a few years to come. 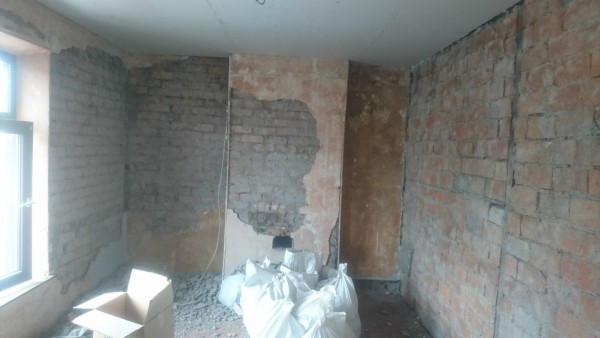 The destruction was the easy and ‘fun’ bit.

Again once you’re into it you realise other things need to be done. The wall needed to come down and took no work to remove because the whole thing swayed upon touch and you could remove bricks by hand. The removal was the fast part. Getting the bricks out and into the garden (which still looks like a brick reclamation yard) was one hell of a workout. The room also had a light above where the bed would have been and only one power outlet so we did a swap and wired in some new sockets, two for beside the bed, one for a TV on the wall and another for what was going to be where I wanted a dressing table (plans change and I fell in love with a giant chest of drawers). Ideally, with budget being no option we could really do with rewiring completely and changing the radiator pipes but you can only do what you can.

Next, it was on to the stud wall and building that up. A little awkward when things are kind of wonky. We took it up to the door and could probably have done with replacing a little more but it was a lot more work and the wall was stable around the doorframe. 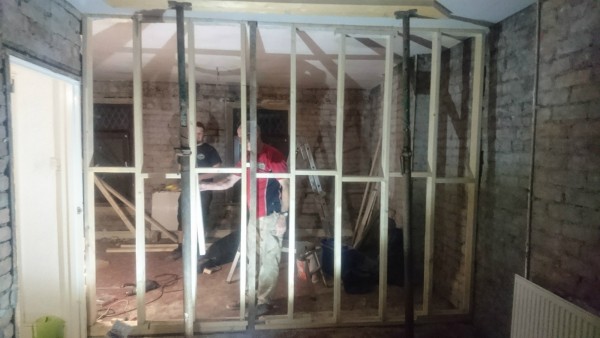 My dad was a godsend and we learned a lot while he was with us. Plus he’s a constant inspiration as he works damn hard. Thankfully he’s built a few houses so he’s got a good idea of what needs to be done. Us on the other hand, we’ve got a lot to learn! The next few steps were getting things ready for plastering, sorting out the electrics and clean up. The dust was beyond. Again, thankfully I have an amazing family and my uncle came up to help with the plastering which for one was a huge help and saved us so much money. Without them, we’d have got nowhere! 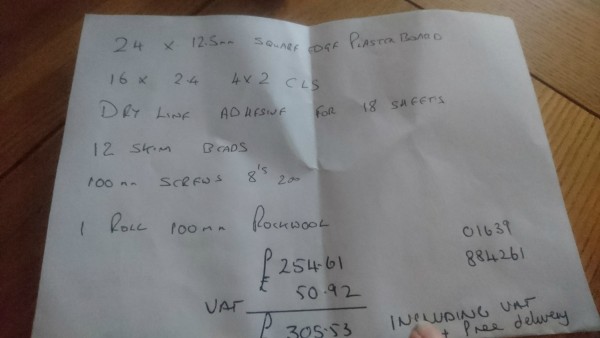 We got the materials. My uncle and dad did the plastering. 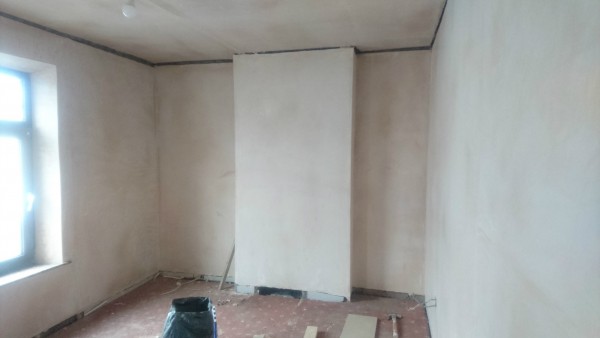 You almost feel as if you’re on the home stretch when the plastering is done but there was so much between this stage and getting it to where it is now. Here is my Pinterest board for what I had in mind before we got started. It’s pretty much on point with a few changes. But we are over the moon. 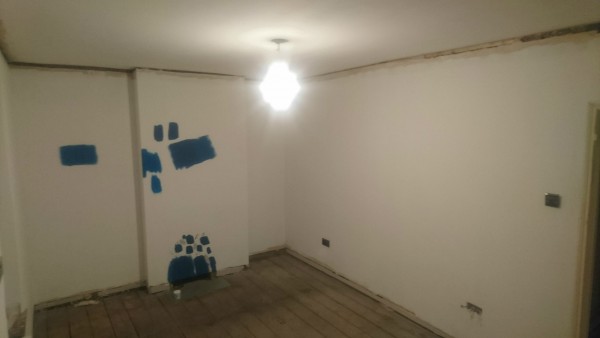 Mist coat on and trying to decide on colour.

We used this Screwfix Bare plaster paint rather going down the water and emulsion mix. It’s brilliant, covered really well and it’s cost effective. Definitely worth getting if you’re painting freshly plastered walls. We’ve spent a small fortune in Screwfix in the last year. 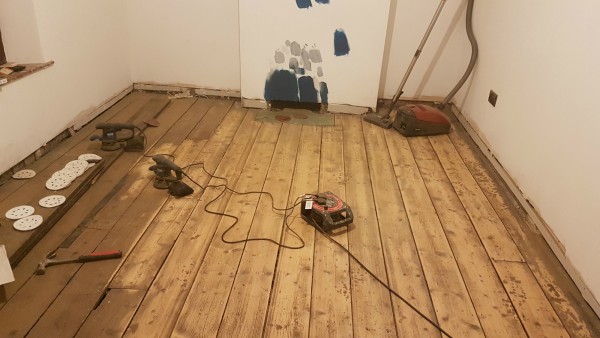 We wanted a more rustic look for the floors which is part of the reason we opted not to hire a big heavy duty sander. Luckily the boards were in great condition and aside from sourcing a few from Theodore Reclamations in Bridgend, we didn’t have to worry too much. We could have perhaps had it levelled in one corner because it seems to have dropped but we only realised when the skirting went on. For around £50 we bought two Energer orbital sanders for the floors from Screwfix. For the sanding discs I went on Amazon and bought several different multipacks which worked out affordable and we have some left over for other projects around the house. We sanded the floor with a 60, 120 and 240 and then filled the gaps with this everbuild foam sealant joint backer rod from Amazon and then filled on top with Ronseal wood filler from Screwfix which we mixed in with the sanding dust to colour it to match the floor better. 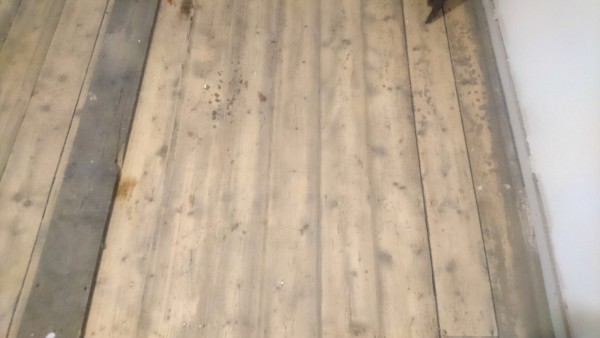 In terms of skirting I wanted something a bit higher to tie in with having the fire, original floorboards and some nice coving. Without spending a lot of money I found something that wasn’t overly fancy but was 8″ in height. I got it from LBS (25mmx175mm Redwood 5th Ogee skirting) and to do so you have to have an account but they are affordable and I’m pleased with the overall look of the skirting. For the coving I wanted something really beautiful to finish the room. I wanted to go for something from Plaster Ceiling Roses and I certainly will in future but for the budget and due to a few issues I actually ended up going for polystyrene coving from B&Q which was £20 for a pack of six. Now it’s up and painted I am surprised and happy with how it looks. For the floor we used Osmo Hard Wax Oil Rapid dry in clear matt. It was on offer when I got it on Amazon and it was £78. To finish the skirting and architrave I actually used paint I had left over from the fence in the garden.

The unofficial hashtag of home renovation! It took us so long and in all honesty for a long time I was ok but I did have a few mental breakdowns and got massively overwhelmed with the amount of work, lack of time and lack of funds to get things done. My partner has had to calm me down on so many ocassions but I know it’s all part of it. I must have said, “we’re getting there” about 1000 times which is where the hashtag comes from. 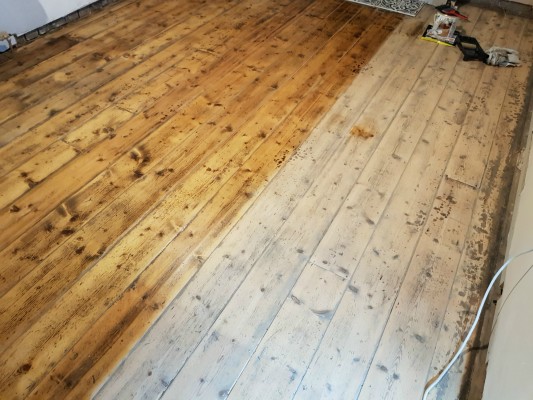 You can tell I got a new phone through the process as the last image is so much better than the quality before. Or perhaps that was the dust? ha. 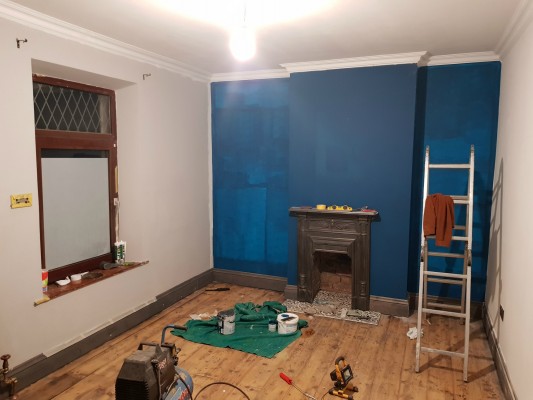 In different stages of coats. Skirting on and coving on.

The radiator we got from an auction for £70 and the radiator valves were from Best Heating. 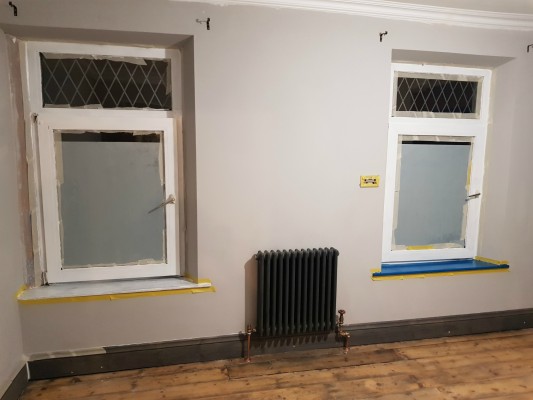 We can’t afford to get the windows replaced yet and the brown really ruined the overall look for me. I did some research and found a product I could use to paint UPVC. I will say it’s not perfect, I pulled the tape off and it pulled paint off so I had to touch up and it drove me mad but for £20 it has made a huge difference inside. I used Dulux weather shield multisurface quick dry satin paint from Amazon.

I painted the windowsill grey to tie in with the skirting and to contrast against the wall, painting it with a multisurface paint. Then the final touches were to put another coat of Osmo on the floor, paint the coving and finish painting the walls. The blue is a custom Valspar colour which I got to after 200000 testers and the grey is Dulux Chic Shadow. 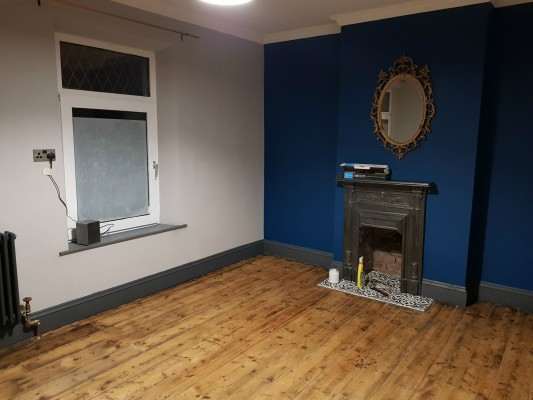 The curtain poles were black but I quite liked the use of copper pipes as a quirky little finish. The curtains we got from Dunelm. I never considered spending much on curtains but we got them for about £90 on the sale, they are thermal and well lined so block out a lot of light and keep the heat in. They are 90×90 and we opted for one curtain for each window. 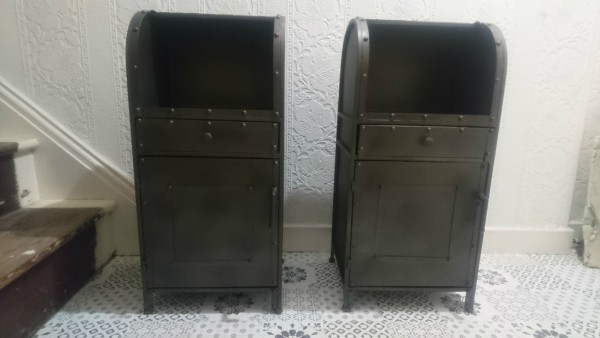 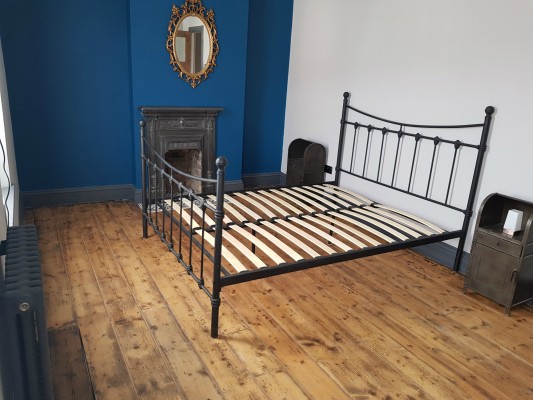 The importance of scouring the internet for bargains is never truer. I got beautiful old doors for £30 for five on Gumtree, the fireplace in the bedroom for £40 and the bed frame for £50. I took so much time to find a bed I liked and wanted black because I knew it would pop in the space. I happened to look on Gumtree days before we had the room finished and found this one for £50. Online they were around £200-300 for the same thing so I was over the moon. I love a bargain and I love finding little pieces for my home. 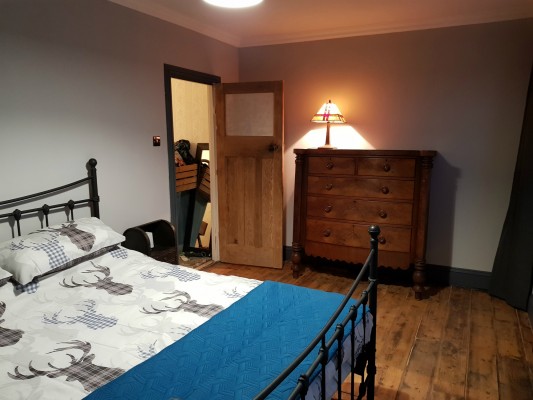 Above is one of the doors (we changed the film since the photo to something that looks more like stained glass. The beautiful chest of drawers are why my dressing table never happened. I got it for £90 from this little gem of a second-hand furniture place in Port Talbot. If you like that sort of thing and you’re in the area, here’s their eBay page. 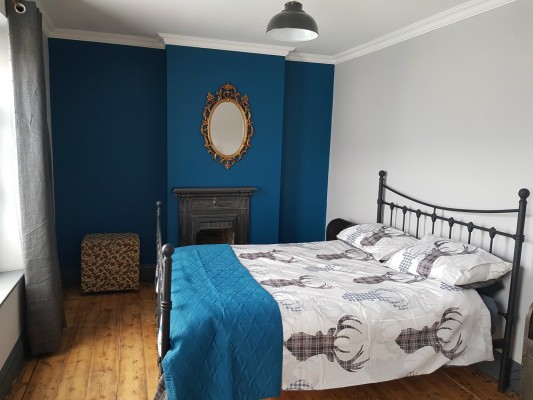 Over the moon isn’t the word. There are a still a few final changes to make, a shelf here and there and a few decorative things but we’re in. This gives me so much hope for how the rest of the house will be and I will be working on my next lot of Pinterest boards!

If there’s anything you’d like to know that I’ve not covered please let me know.